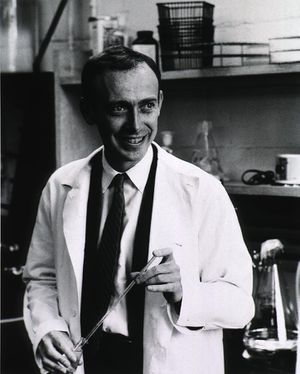 Nature paper about the full sequencing of James Watson's genome. Note a later correction in the data.

CSHL had a genome browser interface for Watson's data at jimwatsonsequence.cshl.edu.

His promethease report is based on his 1.8M snps. During the initial June 1 2008 analysis only 570 of his snps had SNPedia annotations, far less than the ~1500 we'd know if he'd been run on a 23andMe microarray. As of Dec 2014, he has 10,848 snps are annotated, while the latest 23andMe chip has ~20,000 annotated snps. These lower counts despite the full genome appears to be due to an upstream decision to leave out snps in their 'normal' form. It would be helpful to have the full set, but regenerating it from the fasta files is left for another time. While some of the snps are of questionable confidence, his sequence gives a first look at human haplotypes.

I am homozygous for the ‘10’ variant of the cytochrome P450 drug metabolizing gene, CYP2D6. As a result, I metabolize beta-blockers much more slowly than most other Caucasians, who largely carry the more efficient metabolizing 1A/1A genotype. Before I had this knowledge, my use of beta-blockers to control my blood pressure caused me to constantly fall asleep at inappropriate moments. Instead of a daily pill, I now take one every week. -- James Watson source

Retrieved from "https://www.SNPedia.com/index.php?title=User:Watson&oldid=871981"
Category:
This page was last edited on 3 December 2014, at 06:25.
Privacy policy
About SNPedia
Disclaimers